TENDAI AND THE LOTUS SUTRA

As evidenced by the scarce information under "Origin" on the previous page, the detailed history of how Mahayana arose and grew as a religious movement is not well known. There are many writings along a more philosophical line that we can use to to trace the conceptual development of Mahayana thought, but for the moment, those go beyond the intent of our discussion. We shall briefly look at some of them further on, towards the end of this larger section on Mahayana. One thing, however, is clear: From the outset Mahayana Buddhism never came with a single set of beliefs or practices. There were disagreements, and various commentators wrote down their particular approaches in books and pamphlets. Furthermore, new sutras came on the scene as well. They were clearly not in accord with the Pali canon, the Tripitaka. Nonetheless, they claimed to be a record of the Buddha's own teachings. Imitating the style traditionally ascribed to Ananda with regard to the Pali sutras, they, too began with the assertion: "Thus I have heard."

These supposedly newly-discovered sutras often conveniently supported the beliefs of a particular group within the Mahayana circle, by putting their specific ideas into the mouth of Sakyamuni. It is undeniably a part of the nature of many Buddhist schools to favor or create different scriptures to suit their needs. One sutra that received wide acceptance bore the title, "Sutra of the White Lotus of the True Dharma." Commonly referred to simply as the "Lotus Sutra," we know neither when it was written, nor even in what language it was born. The first confirmed evidence we have of it falls into the third century AD. We will return to it in a bit.1

I need to take a step back here and make an important point so that one can see what follows in the correct light. Buddhism, like Christianity, is a missionary religion. Some Buddhists, trying to conform to contemporary political correctness, may have spread the idea that it is not a part of the nature of Buddhism to seek to convert anyone, but that notion is not only wrong, it is contrary to the nature of this religion. Its very beginnings stress the idea of Buddhist outreach. For example, some versions of the account of Buddha's time underneath the Bodhi tree, credit the Hindu god Brahma (recognized iconographically by his four faces), with persuading the newly-enlightened Buddha to go out and preach the dharma so that many people would find the way of release from suffering. And that attitude has always been a part of Buddhism. King Ashoka himself sent out missionaries to Kashmir and Sri Lanka. "Conversion" does not have to mean "conversion by force." 2 The point is, then, that Buddhism, particularly in the form of the newer Mahayana versions, was spreading as various individuals visited new countries and taught their new faith.

One country that stood out as the destination of many Buddhist missionaries was China. The religious history of China has never been anything but complex, and Mahayana Buddhism, with its supernatural Buddhas and Bodhisattvas, filled a need. (It is commonly accepted that religious Daoism developed its formal pantheon of gods in reaction to Buddhism). So, when Buddhism came to China, Chinese culture was ready to accommodate it, but not without leaving its own unique stamp on the religion. A problem that a number of newly-converted Buddhists in China encountered, however, was the aforementioned one that Mahayana Buddhism did not come with a single, consistent belief system or with dogmatic philosophical principles. Many new Buddhists in China, who were intent on studying the various Buddhist writings found that they could not reconcile all of the scriptures and commentaries.

Then along came Śramaṇa Zhiyi (Chi'i, AD 538-597), a Chinese monk, who discovered his insight on the Mount of Heaven (Tiantai). Consequently his followers became known as the Tiantai school, which metamorphosed into the Japanese "Tendai." He attempted to sort out the various Mahayana writings, which appeared so evidently inconsistent, by creating a chronological sequence in which the Buddha may have delivered the various sutras. As a simplification we can say that Sakyamuni at first taught ideas that would attract only particular people. Then, later, when he felt that his listeners were ready, he began to reveal the truths of Mahayana, culminating in the Lotus Sutra. During the time of the Hinayana schools, people had three ideas of how someone could find enlightenment. There was the way of the disciple, which led a person to becoming an arhat based on being taught the four noble truths and following the eight-fold path. Some schools of thought also acknowledged the possibility of someone becoming a Pratikeya Buddha. Such a hypothetical person could be studying the nature of the universe and its causes and effects. In the process he may come to the realization that turns him into a Buddha. Then, of course, there is the true way of the Buddha, based on the fullness of all knowledge and cosmic compassion for all sentient being. This third way, said Zhiyi, was the truly mature teaching of the Buddha. This understanding is also typical for many other schools of Mahayana Buddhism

Zhiyi subscribed to the concept, which we will explore in more detail a little later, that the world is caused (as in "dependent origination"), but is also ultimately Sunyata, which means "emptiness" or "pure nothing." Consequently, he advocated a doctrine that includes a slight switch of emphasis from Theravada teaching. In the older, more traditional, school, the way to enlightenment led to the realization of non-self (anataman) along with the impermanence of the universe. For Zhiyi and other Mahayana leaders, non-existence did not stop with the self, but included everything, and thus, the realization creating enlightenment is that all is Sunyata. Thus, in his view, the acceptance of nothingness and enlightenment were actually synonymous, and together they constituted Nirvana. In other words, he instructed his followers not to think of Nirvana as some place, whether in our time and dimensions or anywhere else, but as the complete divorce of the mind from all time and space.

So, all things share the same nature of being caused, while ultimately consisting of nothing. Then there is no distinction between the flea, the human, the demon, or the Buddha. When you come right down to it, they are each exactly what the other one is, and, thus, they can all become Buddhas. 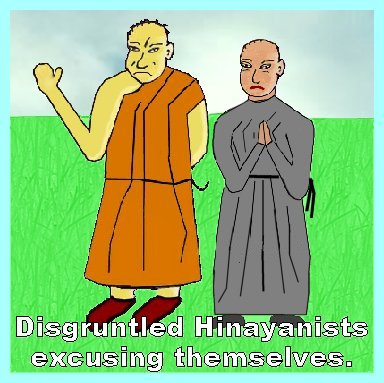 What confuses many a casual student of Buddhism is why, if the Mahayana chronology is true, the Buddha should have taught the difficult message first and reserved the easier and far more attractive teaching for later. At first he required people to become bikhus and to work up from there to becoming arhats, which only a few people could achieve. Then later, he preached that full Buddhahood was available, and that anyone could attain it. Why the earlier disinformation?

The Lotus Sutra gives us a clear answer to the question: The people were unwilling or unable to hear the true message, and so the Buddha taught several ways to enlightenment in order to get their attention. In reality, however, there is only one way, and it is the third of the three ways mentioned above. There is a principle behind this approach to teaching. In Sanskrit it is called upayana, and it means "skillful means." The next page has a more extensive discussion of it.

Is this notion then supposed to mean that the Arhats, the holy men of Theravada Buddhism, were on the wrong track? Indeed, it does. The Lotus Sutra is extremely harsh on them. In chapter 2 the Buddha was about to expound the greatness of the Buddha-way, with Sâriputra, one of his early main disciples, as his immediate sounding board. But there were many arhats and their followers in the audience. They thought that they already knew all there was to know, and they were offended that the Buddha would go over ground again that was supposedly beneath their level of sophistication. So, they marched out in a huff. To quote from the poetic version of the incident:

Thus, even though some of the differences between the teachings of early Mahayana and Theravada seem to be slight to the outsider, their respective adherents took them to be very important. As illustrated in the Lotus Sutra, Zhiyi and others did not just see Mahayana as an expansion of the tenets of the earlier Hinayana schools. They believed that their understanding of Buddhism had replaced those arhat-centered versions.

The Tiantai school thrived in China and eventually became important in Japan as well, were it was known as Tendai. By that time, however, the relatively straightforward teachings of Zhiyi had picked up a number of the magical and occult practices derived from Tibetan Buddhism, and it was reckoned among the "esoteric" schools.

1There are two translations of the Lotus Sutra in common use today. A rather modern one is Burton Watson, transl., The Lotus Sutra (New York: Columbia University, 1993). Watson's translated from a Chinese version under the auspices of Soka Gakkai International. The other one is very diferent in many aspects, but, because of its easy availability and the ability to link to it directly, most of the references in this section will be to it. It is the venerable translation in the Sacred Books of the East, vol. 21. H. Kern, transl., Saddharma Pundarika or The Lotus of the True Law (London: Oxford, 1884). This version, like all 50 volumes of the Sacred Books of the East, edited by Max Müller, is available at the Internet Sacred Text Archive. Kern translated from an ancient Sanskrit version. There are other points of distinction of which we should be aware.

2Unfortunately, just to make sure that we close the door on anyone using misinformation as a weapon in lively debates on religion, Buddhists, just as adherents of most other religions, also deviated from the ideal and shed blood, both on behalf of Buddhism per se and to promote particular schools of Buddhism.    Back to text.