THE MULTIPLICATION OF DIVINE BEINGS

The early predecessors of the Theravadins, the Sthaviravadins, already believed that there was more than one Buddha. For more information about these Buddhas you can work through the extended descriptions provided in the Theravada section. And, in fact, one of its competing early schools, the Sarvastivadins, provided the basic philosophical rationale for the explosion of Buddhas and Bodhisattvas once Mahayana emerged. The early Theravada belief was that each of these Buddhas was at one time a human beings who set out on the quest for Buddhahood, which he attained after many eons. Each one of them will serve a term as the Buddha of his age. Thus, Sakyamuni (Gautama Buddha) is the Buddha of our age. He was preceded by Kassapa, who presided over his age, and eventually will be succeeded by Maitreya, who will be in charge of the next age. Thus, there is a succession of Buddhas, one at a time. An eventual Buddha who has fulfilled all that is necessary to be a Buddha, but has not yet taken that final step to Buddhahood and nirvana is a Bodhisattva. So, technically right now the status of Maitreya would still be that of a Bodhisattva.

But what if there actually was no real succession of time; that is to say, that everything existed all at once? This was what the Sarvastivadins held. As their name implies, they said that "everything exists" simultaneously. According to them, distinctions in time were only based on our artificial perceptions of chronological sequences. They applied this principle to the Buddhas and their Bodhisattvas. Thus, from their perspective, there are neither past, present, nor future Buddhas. The very first Buddha (which is a precarious notion) exists right now alongside the very last one (an idea that is even more of a mind trap), even if, from a limited human point of view, they are not visible on earth at the moment.

This idea was taken over and expanded on by Mahayana Buddhism. Leaving philosophical considerations aside, if you believe that not only all human beings, but all sentient beings, including animals, ghosts, and gods, will eventually achieve Buddhahood, you have to reckon with millions of Buddhas and Bodhisattvas. This point is clearly presented in the Lotus Sutra, chapter 6. The Buddha prophesied specifically that Mahakasyapa would become a Buddha:

I announce to you, monks, I make known to you that the monk Kâsyapa, my disciple, here present, shall do homage to thirty thousand kotis of Buddhas; shall respect, honour, and worship them; and shall keep the true law of those Lords and Buddhas. In his last bodily existence in the world Avabhasa (i. e. lustre), in the age (aeon) Mahayuha (i.e. great division) he shall be a Tathagata, an Arhat, &c. &c., by the name of Rasmiprabhasa (i.e. beaming with rays).

The person: Mahakasyapa;
The location: the universe Avabhasa;
The age: Mahayuha;
The event: Mahakasyapa, while teaching the dharma, will become a Buddha (a Tathagata) named Basmirprbhasa;
The audience: 30 billion Buddhas.

The reason for citing this statement is, of course, to illustrate the huge number of Buddhas that populate the many worlds of Mahayana.

Needless to say, the names and backgrounds of all of these alleged Buddhas aren't given, and it would not be possible to recite all of them in a person's lifetime. The picture below shows one of the "new" Buddhas, Akshobya, surrounded by numerous other Buddhas. 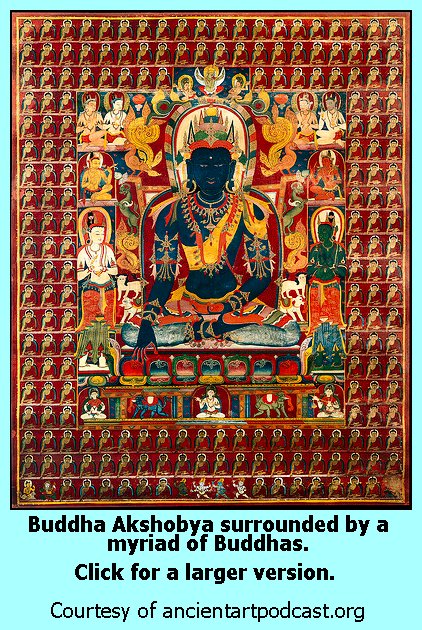 There is a further side to this coin. The number of Bodhisattvas has increased just as much, and frequently the Bodhisattvas receive as much veneration or worship as the Buddhas. The video below catches a few moments of chanting in the Buddha's Tooth Relic Temple in Singapore, which--in distinction to most Buddhism in South East Asia--is oriented towards Mahayana. You may note two things: 1) Monks and laypeople are chanting together, and 2) the statue in front of the hall is not even that of a Buddha, but of a Bodhisattva, namely Avalokitesvara, the Bodhisattva of Mercy, known locally as Guanyin.

Studying the divine beings in Mahayana leads to a paradox. On the one hand, we have said that it is one of the traits of Mahayana Buddhism to allow Buddhahood for all beings. On the other hand, the Buddhas of a number of Mahayana schools appear to be special divine beings, who may have come to earth for a while. We'll explore that understanding of Buddhas on the next page.