If I may be silly for a moment, remind me again of how many bodies you have? I trust the answer is pretty straightforward: one and only one. One is essential; more than one would be unusual, to put it mildly. But that's, of course, because you're not a Buddha. If you were a Buddha, the answer would also be straightforward, namely "three." At least that would be true for many Mahayana schools, and the idea was foreshadowed in Theravada.

Obviously, we're not talking about three simultaneous physical bodies, consisting of the usual materials (i.e. protoplasm) that bodies are made of. That would be an entertaining phenomenon, but it would be pretty much devoid of any religious meaning. Instead, these three bodies represent three different dimensions of existence: the physical, emotional, and spiritual. The concept of "Three Bodies" is called Trikaya, and the three bodies are the Nirmanakaya (physical), Sambhogakaya (emotional), and Dharmakaya (spiritual).1 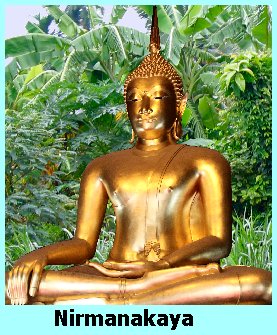 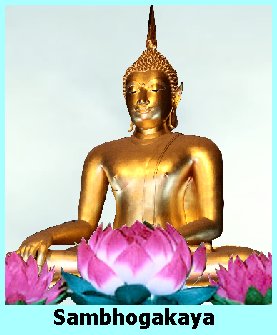 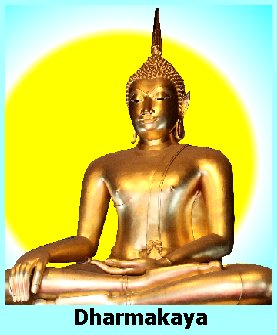 Now, please take a moment to consider the implication of what you just read. The real Buddha is a transcendental being, ultimately different from all other entities in the world. He was not just a human being who worked his way up the chain of incarnations until he attained the blessed state of Nirvana. His Nirmanakaya may have gone through that ordeal, but it does not apply in the same way to the Sambhogakaya and not at all to the Dharmakaya. The Dharmakaya is the true Buddha, while the Sambhogakaya exemplifies for us what we can earn, and the Nirmanakaya is simply the medium in which the Buddha has come to earth to provide us with his teachings.

The idea of the Trikaya becomes difficult to understand in light of the notion that theoretically any sentient being can become a Buddha. However, we do find that the Lotus Sutra or original Tendai Buddhism, who make an important point out of the universal possibility of Buddhahood, have not emphasized the three bodies. We'll sidestep the issue by making a somewhat artificial distinction between different kinds of Buddhas. Many textbooks differentiate between Manushi Buddhas and Dhyani Buddhas. These two terms are actually of Western creation, though they are expressed with Sanskrit labels. A Manushi Buddha is one who found enlightenment on earth as a human being, with Sakyamuni being a good example. A Dhyani Buddha, according to this distinction, is different insofar as he gained Buddhahood in heaven. Because of that location, the Dhyani Buddha did not whoosh off to Nirvana immediately, but is still available for work on behalf of humanity. A case in point is the Buddha Amitabha, whose story begins when he decided to become a Buddha while he was ruling as a king on earth and then went through the aeons of lives, just like Sakyamuni. However, because he had special plans in mind, he let himself become a Buddha in heaven where he could create a "paradise" for humans. This wonderful country is called the "Pure Land," and there are a number of "Pure Land" Schools in Buddhism today.

The problem is that Buddhists in their own contexts do not make that distinction between Manushi Buddhas and Dhyani Buddhas. The latter term is not even used in any original Buddhist writings. The term was coined by Western scholars who were attempting to establish some rubrics by which to clarify the different conceptions of the Buddhas among the different schools. For the individual Buddhist, whatever school he may adhere to, a Buddha is whatever his school teaches him, and he does not need to compare his understanding of Buddhas with that of members of other schools.

So, the bottom line is this: In some schools, the Buddhas and Bodhisattvas have, for all practical purposes, taken on the nature of gods. They are eternal beings with powers far beyond that of any other entity. It has become common practice to talk about these Buddhas as transcendental Buddhas. 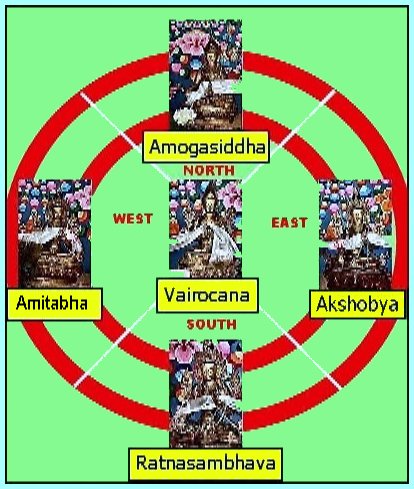 Many schools that adhere to the notion of transcendental Buddhas place them in charge of different quadrants of the universe and give them different functions. There is no standard pattern of how they line up, so the following is only one example, associated with some schools of Buddhism that have some roots in Tibetan Buddhism (Vajrayana). As shown in the diagram above, the four sectors of the cosmos are divided up between Amitabha (West), Amogasiddha (North), Akshobya (East), and Ratnasambhava (South). Each of these Buddhas is associated with a number of Buddhas of relatively lower status, Bodhisattvas, and possibly even gods. But then there is also another Buddha above these four. We can call him "the highest Buddha" in this example, and his name, in this case, is Vairocana. That status makes Vairocana the ultimate expression of the Dharmakaya; he is reckoned to be the Adi Buddha or "True Buddha." Others say that the Adi Buddha is still another Buddha who stands even above Vairocana. In some Tibetan sects this position is ascribed to one Samantabhadra, who is only a Bodhisattva in other Mahayana schools, while still other Tibetan schools assign the name of Vajradhara to the Adi Buddha. As I said, there are many varieties.

Another common variation among the above is found in certain Chinese schools.  There Akshobya is replaced in the eastern quadrant by Amitayus, the Medicine Buddha. In the case of the schools to which the diagram above applies, Amitayus is thought of as an emanation of Amitabha.

Not only are the possible variations potentially unlimited, there is also no way of saying which one is right. Since these Buddhas are all figures of human speculation, whether you want to think of them in terms of an intuition or an insight or a fantasy, there are no means by which we can test which version is the correct one. 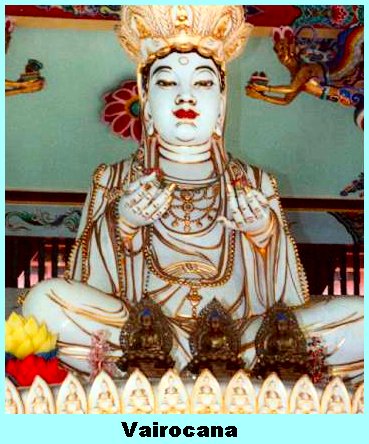 1Please allow me to mention that attempts to impose a similarity between the Buddhist doctrine of Trikaya and the Christian belief in the Trinity only hold up, as is usually the case, on the principle that two things are the same or similar if one ignores all the differences. To find any similarity between one God who exists eternally in three persons and one Buddha who has three different kinds of bodies requires an impossible tour-de-force, which only appears increasingly contrived when one studies them more closely in their particular religions. It begins and, more importantly, ends with some form of a triad associated with a divine being.