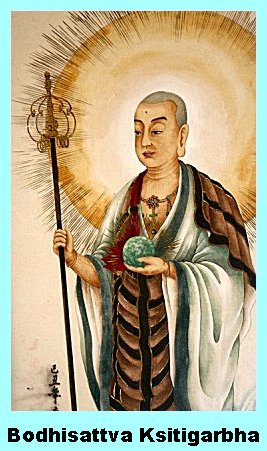 As mentioned earlier on, as Mahayana developed, not only did the number of Buddhas increase drastically, the same inflation also occurred among the Bodhisattvas. Also, similarly, there is a sizeable number of Bodhisattvas who are known by name and attributes, but then there are also uncountable myriads of Bodhisattvas of whom nothing else is known.

We have said that a Bodhisattva is a divine being who is one last step away from Buddhahood. So, it would appear to follow that in the not-too-distant future the number of Buddhas will be increased by a large portion of these Bodhisattvas, who are all ready to undertake that final consummation of their spiritual journey. However, this is not likely to happen very soon because the Bodhisattvas have committed themselves to stay around and help other beings find their way to Nirvana. They have seen the misery of life, and out of compassion for the living beings who are constantly suffering, they are foregoing their own full enlightenment to do what they can to be of assistance.

This commitment by the Bodhisattvas is sometimes expressed in terms of a vow that they have taken to that end. The Bodhisattva Ksitigarbha carries a number of attributes, and one of his most important designations is as the "Bodhisattva of Great Vows." His own vow of helping humanity and all other living beings goes like this:

"Not until the hells are emptied will I become a Buddha;
not until all beings are saved will I certify to Bodhi."

Not every Bodhisattva is said to have expressed that same resolve as dramatically as is believed of Ksitigarbha, but they all have made that commitment. Thus, in Mahayana compassion for others becomes a much stronger motif than it is in Theravada. This distinction, as we have already intimated, is one of the themes that runs through the Lotus Sutra: the older form of Buddhism supposedly is selfish because it limits the opportunity for enlightenment to bikhus, and declares that Buddhas and arhats--having attained their goal--are going to leave the world for Nirvana. We can see, then, that Mahayana solves the problem of where lay people can turn with their particular needs; the transcendental Buddhas are governing the universe and, most importantly, the Bodhisattvas are present to be of aid for all the various obstacles that people may encounter. Do you have some sort of special concern? There's a Bodhisattva for that!

A complete inventory of all of the billions of Buddhas and Bodhisattvas of Mahayana Buddhism is clearly impossible. Even a relatively comprehensive list will have to wait for a serious expansion of this website. As we already alluded to on the previous page, not only has their number increased drastically, but there is no consistency. The picture below shows three Bodhisattvas who are displayed in a hall at the Bright Hill Temple area in Singapore:

The best known and most widely distributed of the Bodhisattvas is Avolikitesvara. Virtually every school of Buddhism, including Theravada, has found a significant place for him. In Tibetan Buddhism, he is known as Chenresig, and the Dalai Lama is supposed to be his incarnation. However, he also plays an independent role in Tibetan Buddhism and is said to be married to White Tara, the female (!) Buddha of Mercy. When Buddhism came to China, there already was a female folk deity, known as Guanyin, so there was no need to bring White Tara along. Instead, Avalokitesvara's identity as male Bodhisattva merged with that of Guanyin, and it is common practice to use the names interchangeably and to be aware of the fact that the statues of the female Guanyin simultaneously represent the male Avalokitesvara.

Thus, you see that a single Bodhisattva (as well as a single Buddha) can appear very differently in different geographic areas and schools. However, the variability does not stop there because each of these being can also have different aspects within a specific tradition. In that respect they closely resemble Hindu gods who may appear in benign, detached, or wrathful forms. Below is a set of pictures of Avalokitesvara in various versions. 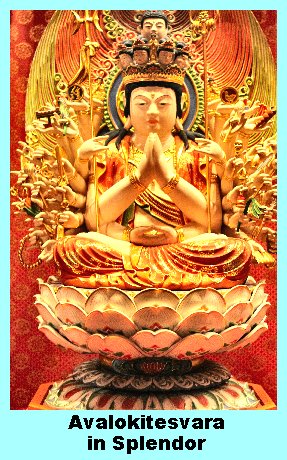 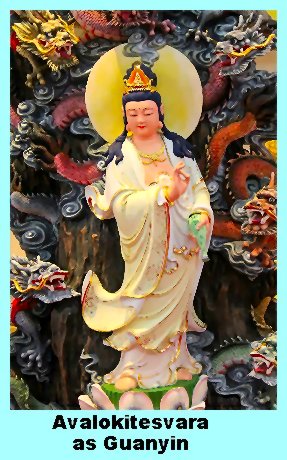 The important point to remember concerning the role of Bodhisattvas, including Avalokitesvara, in Mahayana Buddhism is that their various forms and actions are geared towards expressing benevolence toward all beings. Now, they don't always look that way. The horse-headed Avalokitesvara pictured above, for example is not exactly cuddly. But benevolence or compassion are far from being softhearted and sweet. In this case, he is certainly angry, but his anger is directed at the various hindrances that keep human beings from attaining enlightenment. Compassion pervades everything.

But there is no "everything"!

What there is, is Sunyata, the Void or Absolute Emptiness, and we'll discuss that concept on the next page. However, we need to realize that this factor does not change the above inference. That is to say, it is still true for many schools of Mahayana that everything, even if it is ultimately only Sunyata, is suffused with compassion.