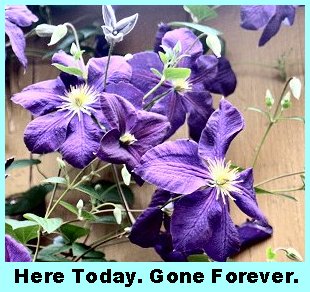 So, it would appear that the bottom line for Theravada Buddhism is somewhat pessimistic: An illusionary self clings to an impermanent world and discovers that it can never actually have whatever it reaches out to grasp.

Are you experiencing a beautiful moment of pleasure? Poof! It's gone, never to return.

Do you want to hold on to a loved one forever? You know that you can't.

Do you think that you can prevent change simply by doing nothing? Let's say that you attempt to hold your body perfectly still, think no thoughts and perform no actions. That doesn't work either. Sooner or later (and probably sooner) your body will start to feel rather painful if you don't move it; you can't avoid being conscious of your pain (that's a physiological given); and, regardless, in a hundred years you will be nothing but a decomposing corpse, a skeleton, or a mummy--depending on your local climate.

Change, and, therefore, suffering, are inevitable.

Now, we need to realize that in the Buddhist world view there is no such thing as an uncaused dharma. The phenomenon of dependent origination means that each "event" is dependent on all others. It may be short-lived, existing no longer than a fraction of a fraction of a second, but all dharmas have causes and, in turn, they cause other events. Impermanence does not mean non-existence, and momentary existence does not mean uncaused existence.

The Buddha was teaching these things early during the time when the Indian schools of philosophy (darshans) were just developing. One of these was the school of Samkhya, and it is helpful to bring up this school of thought because it provides a very clear contrast with Theravada thought. According to Thanissaro Bhikkhu, some of the Buddha's sutras may have been delivered to an audience of Brahmins who had been raised in some early Samkhya thought and were somewhat put out when the Buddha's teaching flew directly in the face of their thought. One example to which Thanissaro Bikkhu refers is the Mulapariyaya Sutta, The Sutta about the Sequence of the Root, Majihima Nikaya 1, 1.

The school of Samkhya holds virtually everything that we do not usually associate with Hinduism. It believes in a plurality of souls; it is thoroughly atheistic; and its main goal is the liberation of the individual immaterial soul (purusha) from the material world (prakriti).

Each of the Hindu schools of philosophy has a central, highly cryptic Sutra, attributed to its alleged originator. In this case that role is played by the Samkhya Sutra by Kapila. [The Sánkhya Aphorisms of Kapila, trans. James R. Ballantyne 3rd ed. (London: Trübner, 1885)]. In the course of describing the nature of the universe, Kapila needed to address the question of its origin. As mentioned already, any idea of a Creator-god was out of the question, and so he resorted to the idea of an abstract "root" of all things that has not been caused by anything else. He stated in (1:67),

Since the root has no root, the root [of all] is rootless.
mule mulābhāvād amulam mulam

So, Kapila said that underneath all reality there must be a root for it all. Sure, we can ask, What is the root of the root? and stipulate a further root, but then we would have to ask about the root of the root-of-the-root, and we'd just be playing games with words. So, he concluded that there is a root, and that it makes no sense to find a further root for it; it is uncaused.

Now, to understand Buddhism, we must recognize that the idea of anything being uncaused is incoherent. Nothing has independent existence, and nothing exists just because it is impossible for it not to exist (what philosophers call "necessary existence"). Everything is caused. So, in the Mulapariyaya Sutta (Majihima Nikaya 1.1), Shakyamuni (the earthly Buddha) agrees with the Samkhya philosophers that there is a root of reality. However, nothing in the universe simply exists; everything that we believe to exist must be caused, and that principle applies to the root of all reality as well.

There is a lot of discussion in the history of Buddhism on what it means for something to exist, particularly in the later Mahayana schools. However, in each case, to whatever extent it may make sense to speak of the reality of the universe in Buddhism (which can be very minimal), to that same extent it must have a causal root. But, just like any item in the universe, that root must itself be caused. That rule holds as long as we come to the point of enlightenment and realize that the whole notion of a fixed universe is a grand illusion, caused by our perception of it and our delight in it. Thus we have to locate the cause of the universe within ourselves. To shorten a point we shall elaborate on more closely momentarily, delighting in something brings about craving for it, and craving ultimately brings suffering. So, there is a root for the universe, which is real as long as we believe that the universe as a permanent fixed substance. And this root, as part of our misguided perception, must be caused by our ignorance. Among the various conditions for ignorance, in the Mulapariya Sutta the Buddha focused on the idea of our taking "delight" in earthly things as the problem. Interestingly, the Sutta records that at the end of this discourse the former Samkhya students were offended by this idea, and left the premises grumbling and dissatisfied.

To complete this little byplay, in the Gotamaka-cetiya Sutta (The Sutta at the Gotamaka Shrine, Anguttara Nikaya 3.123) the Buddha asserts that all things, including his Dharma, have a cause. This time his teaching was well-received. Then in the Mula Sutta, (The Sutta about the Root, Anguttara Nikaya 10.58), he provides a recitation on the causes of the world, which he begins with desire and ends surprisingly with the Unbinding, which is the realization of Nirvana, and nothing is said one way or the other concerning the audience's reaction.

So, some things are clear, but some are perhaps getting more confused. We can add one more philosophy to sharpen the contrast, namely the religion of Jainism, which arose around the same time as Buddhism and some of the new schools of Hinduism. In the Jain Mahapurana 4.16 we read:

Good men should combat the believer in divine creation, maddened by an evil doctrine.
Know that the world is uncreated, as time itself is, without beginning and end.…
Uncreated and indestructible, it endures through the compulsion of its own nature,
Divided into three sections — hell, earth, and heaven.

Thus, Jainism rather vehemently denies that there is any root. Reality is simply a given, which we must accept without probing for what brought it about.

Now we have three logical possibilities represented by three religions:

There's no question about it, though, it may seem to us that, on first reading, the idea that all things are caused does not seem to fit in with what we may think we know about the rest of the Buddha's ideas at all. Furthermore, substituting a human emotion, such as delight or desire does not seem to make a whole lot of sense either. How can the existence of the cosmos depend on my fickle feelings? So, we need to explore that matter further, and I think it's probably best to turn another page to trace those thoughts.