The Second Buddhist Council took place about a hundred years later after the first one, which makes it roughly a hundred years after the Buddha was said to have entered nirvana. Once again, the main item of concern was the collection of the scriptures, the so-called Pali Canon. Its name is based on the fact that apparently its earliest version may have been in the language called Pali, which is closely related to Sanskrit, the Hindu holy language, and Prakrit, the ancient common language of India. However, this time the discussion of the Canon was not just a matter of assembling the appropriate writings, but of adjudicating between different schools who had their own preference as to which scriptures were considered to be authentic, and which ones were not.

The Pali Canon is frequently called the Tipitaka (Pali) or Tripitaka (Sanskrit), which means "Three Baskets." The reason for this name is that it consisted of three sections: the Vinaya Pitaka, which contains the rules for Buddhist monks, the Sutta Pitaka, which holds the discourses of the Buddha and some of his main disciples, and the Abidhamma Pitaka, which accommodates a lengthy explication of the Vinaya. Now, when you hear the term "basket," the question may come up as to the size of these conveyances. Well, think of baskets larger than any that you have ever seen. The picture on the right shows a book case in a library, and all the books that you see there are parts of one edition of the Pali Canon in a modern printing. 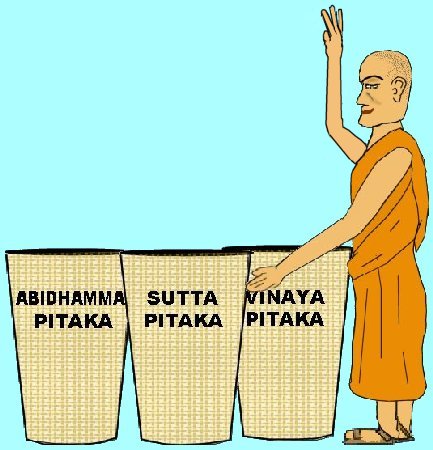 The Second Council saw the first split among Buddhist factions. The answer to the question of who walked out on whom depends on whose records you read. Now, please understand that both of these groups were good Buddhists, and neither of them held any bizarre ideas, but there was enough disagreement that they could not cooperate with each other. In addition, there were also groups of monks there who had found ingenious short-cuts around the discipline of the sangha. For example, they would get around the prohibition of alcohol by drinking a beverage before it was completely done fermenting. These clever brethren were simply given the boot. However, the two schools that emerged and divided at this point were not looking for shortcuts, but had sincere differences in their interpretation of Buddhist doctrine. They were the Sthaviravadins (who would eventually be known as the Theravadins) and the Mahasanghikans. The latter group undoubtedly was a forerunner of the eventual Mahayana orientation. 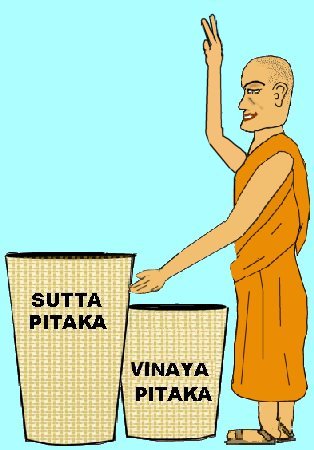 The Mahasanghikas may actually have constituted the majority of monks at the Second Council, which would be one explanation for their name, the "great" or "large" order. There is no agreement among scholars as to what may have been the precise catalyst for the secession, but we do know that the Mahasanghikas held certain beliefs that were categorically distinct from those of the Sthaviravadins.

By showing up these contrasts, we simultaneously learn some of the beliefs that were a part of the Sthaviravadin doctrines. They must have held to a very strict version of the Vinaya basket, as interpreted by the Abidharma basket. They believed that the Buddha was originally a human being, and they argued that a person who is truly an arhat is infallible. More of the Theravadin distinctives will show up as we move on to the Third Council