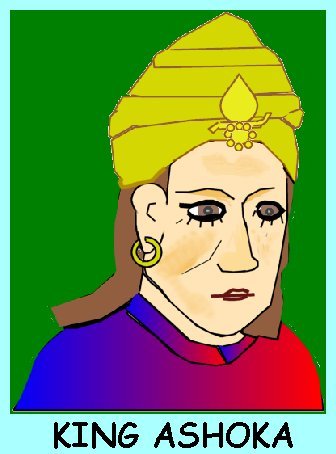 The Third Buddhist Council occurred during the reign of King Ashoka, roughly around 250 B.C. Ashoka had followed the common method of attaining the throne by eliminating rivals with warfare and bloodshed. Once he had become king, he expanded his territory by continuing a policy of cruel and heartless conquest until he ruled over most of India. However, then came a moment of inner despair. In a verbal self-reflection he bemoaned the incalculable damage he had done to people. From that moment on, he embraced Buddhism and the doctrine of Ahimsa, never to harm any living being. This was a major turn-around because up to now, Ashoka had the reputation of someone truly without care, compassion, or even the most basic respect for others. But then he became utterly committed to the truth of Buddhism as shown by the fact that he was willing to do what only someone who is genuinely free of doubts will do: He allowed all of his subjects to practice their own religion, whatever it may be. You see, people who are completely convinced of the truth of their religion can be tolerant because they are secure in their beliefs. It is not people with genuine assurance in what they believe, who persecute others; it's people who are insecure and must assert themselves so as not to feel threatened.

As an illustration, if I may use myself as an example, as a Christian I am confident in my beliefs, and so there is no need for me to suppress what others believe because I don't feel threatened by their disagreement. I neither applaud nor sign petitions that attempt to intimidate politicians with drastic measures if they don't follow certain supposedly Christian standards--even in at least one instance when I was actually threatened with physical violence because I did not. If we were to lower our understanding of what is true to the level of something that needs to be enforced as true by physical measures, then truth would no longer be truth, as commonly understood. It would have been transmuted from beliefs that correspond to reality to beliefs that are defended by whoever has the most power. In that case, there is every good reason to expect that people will enforce their conception of truth by using physical bullying as well; but oh, what a shabby way of handling this large aspect of what it means to be human! I enjoy writing about other religions and communicating with people whose faith is different from mine, and my desire is that they will be as open about their beliefs as I try to be about mine. In short, I would argue that religious persecution is either a pretext for people to acquire power or a sign of insecurity and self-doubt; people who harm other people in the name of religion are often afraid to let the truth of their beliefs be tested in the arena of reason. Ashoka clearly felt that Buddhism could hold its own without suppression of different religions. This fact is also represented clearly by his motto, which is now the national motto of India:

Do you believe that? I'm pretty sure that you must be inclined in that direction, or you probably wouldn't be pursuing this website. -- Or are you merely looking for intellectual ammunition either for whatever you believe or against what others believe?-- An old Chinese proverb says that if you corner the tiger with no way of escape, he will come out fighting. That tiger may have many names, but one of them is "Truth"; the harder people push against it, the more it will prove itself to be truth.

King Ashoka also sent out missionaries to neighboring kingdoms in order to spread the dharma. Specifically, he had success in making converts in Sri Lanka, Kashmir, and Gandhara (an ancient kingdom straddling parts of what is now Pakistan and Afghanistan). The version of Buddhism that they advanced was essentially Sthaviravadin because Ashoka's brother, Mogali Putta, had convinced Ashoka that this version was what the Buddha himself taught. At that time, the Sthaviravadins, who would later be known as Theravadins, also called their doctrine Vibhajjavada, the "Doctrine of Analysis."

Because of Ashoka's generous support of Buddhism, there was a number of men who had become bikhus merely to profit from Ashoka's largess, and--of course--there were the usual slackards who gave themselves short-cuts around the rules in order to enjoy a comfortable life combined with the prestige of being a monk. Ashoka saw to it that these folks turned in their robes and begging bowls and rejoined the general population. Regardless, a council had become necessary because there were new schools and new ways of thinking about the dharma that needed to be held up to the light and debated. Thus, Ashoka called the Third Council, which was attended by about a thousand people, and he placed his brother Mogali Putta in charge.

This was a long and, no doubt, wearying convention. The participants spent the first nine months chanting the Sutta Pitaka and the Vinaya Pitaka before any further busines was taken up. But then the council needed to consider the case of the Sarvastivadins.. . .