Contrast to the Pudgalavadin Schools

One of the significant differences between Hindu and Jain philosophy and Buddhism concerns the nature of the "self." The two first-mentioned religions believe that there is an entity, a "soul" or a "self" that must be the bearer of karma (however conceived) from one life to the next through the cycle of samsara (reincarnation--however conceived). Various schools interpret this "soul-self" differently and consequently use different terms for it: jiva, the living soul; purusha, the human person; or perhaps Atman, the True Self that is identical with the monistic reality of Brahman. All Buddhists, on the other hand, agree that there is no "self" in any of the Hindu or Jain senses, a doctrine that is most often expressed by the term anatman (Sanskrit) or anatta (Pali), where the particle "an" performs the same function of negation as it does in English, where, for example, something that does not contain water may be called anhydrous. So, anatman is the "non-self," which does not exist; or, to take the paradox out of it, the denial that a self exists. 1

However, the perennial question Buddhist thinkers have to deal with (if not out of their own curiosity, then because non-Buddhists are sure to raise it frequently) is: If there is no "self," how can there be continuity between incarnations? If there is reincarnation, shouldn't there be a "self" that connects one life to the next? How can a person be reborn as a completely different person? It would appear that one has to choose one option or the other, but cannot have both: either a person is reborn, in which case there must be some mechanism for the continuity of identity, or a different person is born right after the previous person died, and this new person for some reason has to tough out the karma earned by the previous person. The latter option seems both unreasonable and unfair, but the former option seems to be incompatible with the doctrine of anatta.

We can make this question even more difficult, though not all schools of Buddhism go along with the following complication. It's hard enough to maintain the persistence of identity if we consider the rebirth of a person to be simultaneous with the instant of his death, but the puzzle gets even trickier if we believe that there is a time interval between lives. Sthaviravada (Theravada) Buddhists did not believe in an intermediate state, but some of the other early Hinayana schools did. For example, Sarvastivadins held to the notion of a separate stage of life-between-lives, called antarabhava, a nirvana-like phase that could not last any longer than 49 days. Subsequently, most Mahayana schools accepted the notion and elaborated on it in a great amount of detail. Most famously, Tibetan Buddhism called that state bardo, and it became the subject of the famous Tibetan Book of the Dead, Bardo Thodol. If there is such a thing as antarabhava, the question of who or what occupies that state between lives becomes even more urgent. 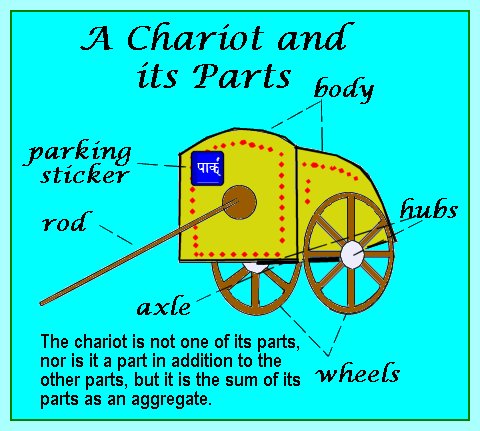 Still, however vexing the question may be, before we can shed any light on how a person's identity can persist through samsara, it makes sense to figure out what exactly a "person" is, but--needless to say--there are diverging opinions among Buddhist schools from the beginning on. Some options would include:

The first position appears to be the preferred one in some of the Buddha's early teachings, but the second and third one were the norm for most of the early Hinayana schools. The fourth one is the subject of this page, to clarify the contrast to Theravada.

At the risk of complicating matters too fast too quickly, it is high time to disclose the terms for the "components," whose aggregations make up the "self." They are called the Five Skandhas, which means the "Five Heaps" or "Bundles" or "Aggregates":

We need to add one more item of vocabulary, and that is "pudgala," which--for now--we can think of as meaning "person," but look for qualifications below.

Since the point of this page is to describe the emergence of Pugdalavadin Buddhism in order to provide the setting in which the Theravada school grew and maintained itself, an elaboration on the skandhas needs to wait a little longer. For our present purposes, we have merely now acquired some nomenclature for the corresponding "parts of the chariot." The "self" is the aggregate of the five skandhas ("the aggregate of the five aggregates"), just as the chariot is the sum of its parts and not another thing alongside the parts. Please note that this analogy applies in each of the options 2, 3, and 4, since option 3 and 4 merely supply additions to option 2, but are not changing the scheme. Option 5 is seriously different. 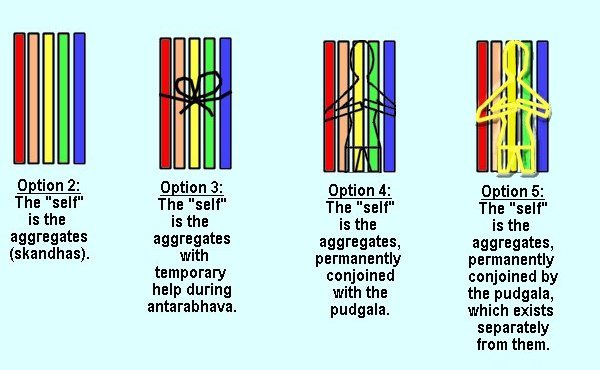