Let us now move forward to the present and take a look at Theravada as it exists today. Not that we can ever ignore historical influences, but our main object of attention will now be Theravada as it has established itself today in the present. If you need to remind yourself of the geographic areas where Theravada Buddhism is strongly represented today, see the map on the introduction page to Theravada Buddhism. We can also remember that it was during the time of King Ashoka that Buddhism first sent out missionaries to areas adjacent to India (Sri Lanka and Kashmir). In his day, as we saw, Sthaviravadin Buddhism was considered to be the correct form, and thus the two primary target areas of his mission, adopted that form; Theravada Buddhism also found a home in most of South East Asia, but most other expansion took place under the Mahayana banner. Finally, you may also want to go back to remind yourself of the main distinctions between Theravada and Mahayana. Mahayana as a whole is treated in its own major section. 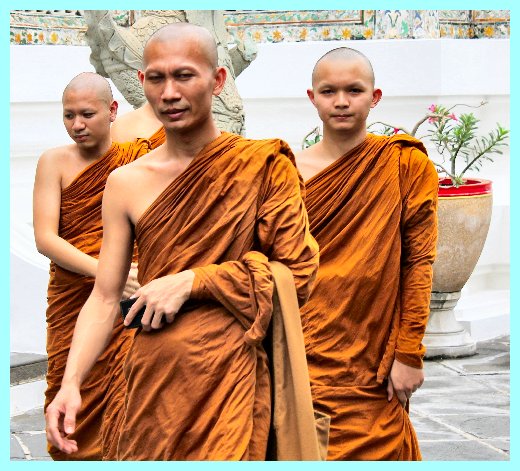 Buddhism, as we have seen, began as a religion of monks. Initially, to become a Buddhist was for all practical purposes to join the order of bikhus, the sangha, and some Buddhists still see it that way. In Thai Buddhism, women cannot officially become nuns, and, thus, some Buddhist teachers maintain that, therefore, women should not be counted officially as Buddhists. Men, even if they have no intention of being monks for all of their lives, have the possibility of establishing themselves as Buddhists by joining the order temporarily. The Venerable M. L. Manich Jumsai states a somewhat drastic opinion that would not necessarily be shared by numerous other Buddhists,

In other Theravada countries women are not excluded either from becoming nuns or from being counted as "Buddhists," and in Mahayana areas, such as Taiwan, the number of nuns may exceed the number of monks. The fact of the matter is that, regardless of gender, in many Theravada countries, being "Buddhist" is the "default" option, so to speak. One simply takes it for granted, even if one doesn't pay a whole lot of attention to religious activities.

A man undertaking temporary monkhood has, then, in a formal way confirmed his standing as Buddhist, as well as earned a certain amount of merit, which may theoretically improve his situation in his next birth. Then he may, perhaps, be able to devote himself full-time to monkhood and the pursuit of liberation. However, in general, men are encouraged to transfer whatever merit that they may have accrued as temporary bikhus prior to marriage, to their mothers, who do not have the opportunity to earn that kind of merit for themselves. In either case, enlightenment and nirvana are not within the grasp of anyone who does not devote himself to a life time as bikhu, and even then, there is no guarantee that he will achieve his goal. That is reserved for the life-long monks, who constantly give their all for the sake of the goal, alone. 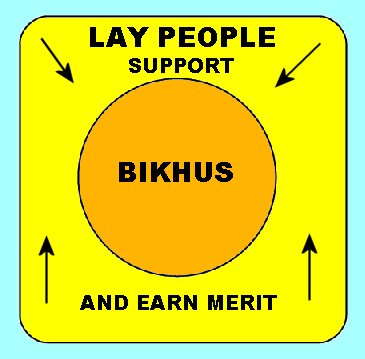 Thus, there is no way of getting around the fact that, to whatever extent Theravada Buddhism is established in a society, to that extent it is a two-level society with the monks highly elevated above everyone else. To return to the Venerable Manich Jumsai, who starts out with a somewhat paradoxical assertion:

Although monks are just ordinary men, they are separated from laymen in a special class of their own. Once initiated into the monkhood, they automatically become a member of the sacred order, the follower of The Lord Buddha. They are to be respected above all men, even the King, the Prime Minister and the highest of noblest of the land. Even parents must bow and pay respects to them. Laymen may not sit higher than monks but usually sit on the floor and bow down three times to show their respects" (Understanding Thai Buddhism, 2000, p. 13). 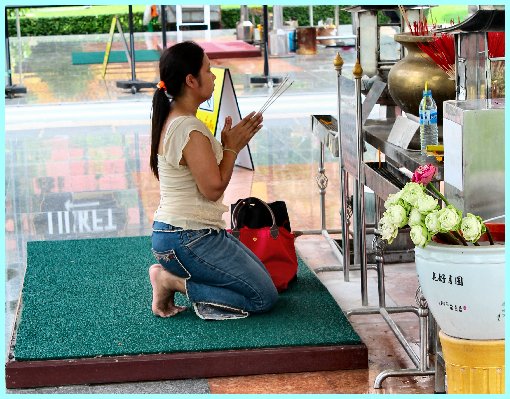 The monks need and expect the support of the lay people. Lay persons do so because it provides them with further merit. Thus, to that extent Theravada monks contribute to the welfare of common people (and this will undoubtedly sound odd to people not familiar with Theravada Buddhism): They allow themselves to be served, so that those who are serving them will have greater merit. Other than that, they are entirely fixed on their own pursuit of nirvana. This is not to say that no Theravada monks ever get involved with community service or other acts of charity. If so, they are doing such things only because they are good people, not because it is a fundamental requirement of the system for them. We can look at it this way: If the lay people do all that they can to support the bikhus in their quest for nirvana, then the bikhus owe it to them to do all they can to attain their goal.

A common analogy is that of a sports team and their fans, standing for the sangha and the laity respectively. Let us say that forty-thousand people have paid large amounts of money for tickets to a baseball game. The members of the home team are receiving good salaries, and the spectators have every right to expect them to do their best on the field. They themselves cannot pick up a bat to swing at a pitch or field the balls in the outfield. All they can do is to cheer on the team and hope that they will win. The spectators will not think that a player is selfish if he gives all of his concentration to the game and ignores the crowd. In fact, they would be indignant if, say, the right fielder stopped paying attention, turned his back on the infield and started to chat with folks sitting in the bleachers while the game was going on. Similarly, the laity is limited in what they can do for the bikhus, but, given their support, they want the bikhus to fix all of their attention on becoming holy men.

As a further consequence of this two-tiered arrangement, when we describe the Theravada belief system, we need to keep in mind that we are referring to the beliefs held and put into practice by the bikhus. The degree of knowledge of Buddhism among lay persons varies greatly. Some of them are well-educated and practice meditation, not all that different from that of the monks. On certain special days, lay people may observe most of the duties of a monk (the "eight precepts). What many other people are practicing has little to do with Buddhism as it is described in any text book. For all practical purposes,they worship the Buddha as though he were a god, looking to him for blessings. They may call on the deities associated with the story of the Buddha or other Hindu deities, and they may engage in various forms of folk religion, some of which may go back to a time before Buddhism arrived in a particular places. At the same time, as mentioned, they support the monks and decorate the temples in the quest for more merits.

We shall look at more details as we proceed on to more specific topics.