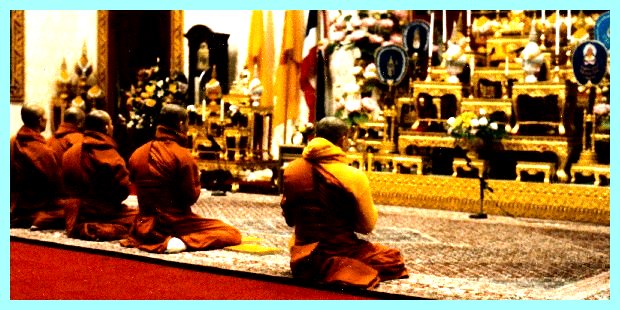 Please let me reiterate this point, lest it cause confusion or misunderstandings. In general, what it means to be a "monk" varies from religion to religion, and oftentimes from order to order within the religion. So, for example, in Roman Catholic Christianity there are different monastic orders with different purposes: Some are devoted to teaching; some to caring for the poor and needy; some to carrying out missions, etc. In general, their theoretical purpose is to serve humanity in some way.

In Theravada Buddhism, the purpose of being a monk (bikhu) is not primarily to engage in good deeds toward others, but to seek enlightenment. Community service in terms of reaching out to those who need physical help is not a part of their fundamental job description. This is something that Buddhist lay persons should do in order to gain merit. As I pointed out on the previous page, bikhus have an obligation to their community to do their best in pursuing Nirvana. Otherwise, there would be no point in supporting them.

Having said that, the order (sangha) of monks does have a definite role within a Theravada Buddhist society, in addition to its primary purpose of attaining nirvana. The monks perform rituals on behalf of the laity. They teach the laity on how to be good Buddhists. And, as paradoxical as it may sound, they make themselves available to be served so that lay people can earn merit by serving them.

A Theravada monk in Thailand is obligated to obey 272 rules. Of these, ten are central. The 10 precepts for monks are:

Viewed from the perspective of the extremes to which some religious orders go, these rules are relatively soft. But seen from the perspective of a Westerner leading what we might consider to be a "normal" life style, the 10 precepts are actually quite demanding, particularly if you consider the fact that a serious bikhu will have committed his entire life to live under these strictures. And let's not forget that there are 262 more rules. 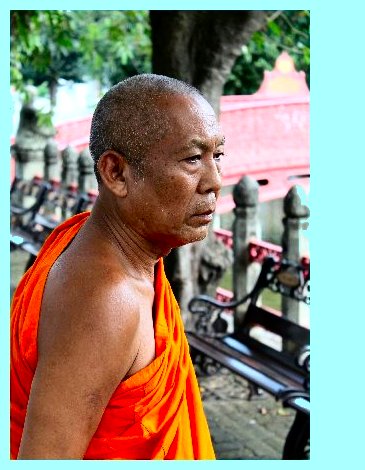 There are seven items that a bikhu may own:

This list may be slightly different in some countries, where an umbrella--to shade the monk from the harsh sun--is usually a part of his standard equipment. There will be other items in the temple that a monk may use, but they are not his own property.

Speaking of property, the question comes up: If monks may not handle any money, what happens to the money that is donated to a temple? Conversely, how does a temple pay for, say, upkeep and repairs? There are answers on multiple levels, and they are not the same in all countries. As far as the sangha as a whole is concerned, there may be a government agency designated to administer religious affairs. Also, individual temples may have private lay sponsorship, including a secretary and treasurer who handles all such matters on behalf of the bikhus so that they can continue to focus on their main calling.

In the video below we see three monks at Wat Suthat in Bangkok. They have just enjoyed a meal while engaging in friendly, relaxed conversation with each other. Now that they have finished their lunch, they conclude by joining in a chant together. The atmosphere is quite informal. But keep in mind: There'll be no more food for these bikhus until breakfast tomorrow morning. 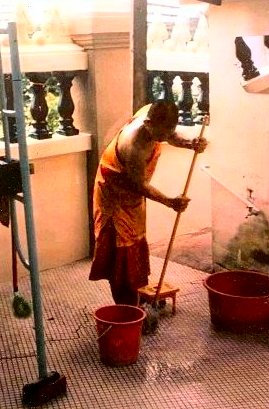 Professor Saeng Chandra-ngam (Buddhism and Thai People, 1999) lays out the following daily schedule for a Buddhist monk. However, he rightly adds the qualification that this schedule can become adapted pretty easily.

One item that is not included on this schedule is very important in the Thai version of Theravada Buddhism. The monks take turns serving in the temple. During designated hours one of the bikhus remains in the main hall of the temple, holding himself ready to welcome clients. People stop by make donations, to be blessed, or to have special objects blessed. In the latter cases, there are, of course, also small donations involved. We will follow such a ritual in detail later on. 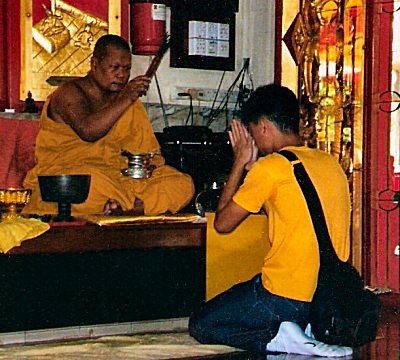