Life of the Laity 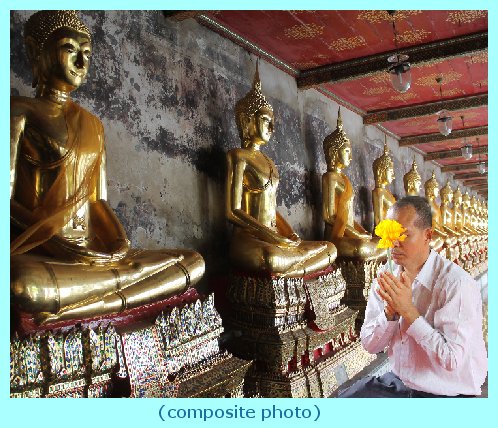 While the monks are pursuing their quest for nirvana, serious lay people hope to earn merit and, in general, become better Buddhists, so that they can be reborn in more favorable conditions, which will make it possible for them eventually to find their way to Nirvana. A real boon would be to be reborn as a human being during the age of Maitreya, the next Buddha, when entry to Nirvana will be much easier than it is currently. On the whole, lay persons do not occupy themselves with much of the traditional teachings. Their main purpose in practicing their religion is to improve their rebirths and to have as trouble-free a life in the present as is possible.

There seems to be an underlying ambiguity concerning the person of the Buddha (Siddhartha Gautama). Theravada teachers firmly insist that he is not a god. Furthermore, when he died, he left this world and entered Nirvana, and thus, he cannot interact with beings in this world any longer. Nevertheless, let us imagine what we might observe as we watch people in a temple. It seems that they are praying to Buddha, asking him for blessings, and are, let's just say it, just plain worshiping him. How can that be?

For one thing, we have to recall that in most Asian countries where Buddhism is popular, so-called ancestor veneration is also usually practiced (not that the two are necessarily intertwined), and so, apart from further religious implications, part of what one witnesses could be seen as, not worship, but paying the Buddha the respect that he deserves as one of the greatest human beings who ever lived. Furthermore, when Buddha left this earthly life for Nirvana, he had accumulated an unfathomably huge bank of merit that stands available for people who devote themselves to him and his way. In many smaller Thai temples it is traditional for a visitor to be handed a piece of candy as a symbol of receiving a blessing from the Buddha.

One way in which the teachings of the Buddha educate lay people is through the many stories of his previous lives. When the Buddha attained 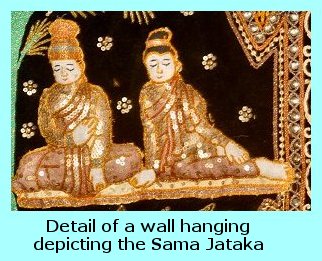 enlightenment, he was able to recall all of his previous lives ever since he resolved to become a Buddha. There were millions of them, but only a fraction (though still sizable) has been preserved. These are called the Jataka tales. Since each of the stories comes from a different life, we see the Buddha incarnated in many different forms of life; he can be a man, a woman, a boy, a girl, even a deer or a parrot, or some other kind of living being. In each of the cases he lived his life to perfection, and each story illustrates an important point of morality or Buddhist wisdom four our sake.

However, even though the Buddha is the one to turn to for wisdom and deeper spirituality, he's not necessarily the best option for the everyday problems of life. For those, someone may want to turn to some other figures. If you recall from the life of the Buddha URL!, the Vedic (i.e. early Indian/Hindu) gods played important roles in leading the Buddha to enlightenment and his subsequent preaching. Buddhism has an ambivalent attitude towards these gods. On the one hand, when it comes to the serious business of reaching Nirvana, which is the sole provenance of the monks, these gods are pretty much irrelevant. They cannot help a bikhu in his quest for enlightenment. On the other hand, they are believed to be real (viz. as real as any given Buddhist philosophy allows anything to be, and people do think that they have supernatural powers with which they can aid human beings. A very, very rough diagram of the universe in Buddhism would consist of several levels, starting from the bottom: demons, hungry ghosts, animals, human beings, semi-gods, gods, and then finally the beings connected to Buddhism, which we will discuss further on. The gods have compassion and power and will answer prayers. The drawback of their existence is that they cannot attain Nirvana; only a human being can do so. But in the meantime, people who simply need help in life can turn to the gods for assistance. 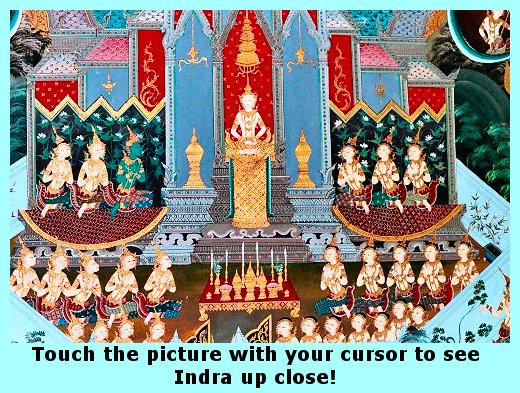 Thai Buddhist lay people follow an old understanding of the Hindu gods, recognizing Indra, a god of thunder and rain, as the king of the gods, a standing that he held in the ancient Vedas, but that faded for practical purposes as, say, Vishnu or Shiva gained greater prominence in Hinduism. Thai Buddhism still gives Indra the place of highest honor among the gods, which, of course, pales beside the priority accorded to the Buddha. Of special significance to Theravada Buddhists is also Brahma, the Hindu creator god because he allegedly persuaded the Buddha not to keep the dharma to himself, but to preach it. Statues of him, known by his four faces, abound in Thai Theravada contexts. 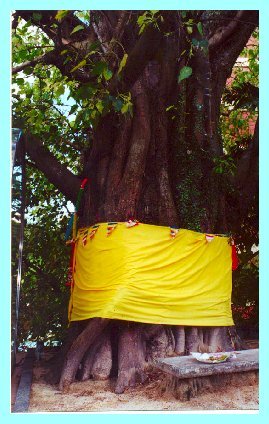 Furthermore, in all of the Theravada countries, there are folk beliefs that have syncretized with Buddhist and Hindu elements and go back to earlier, animistic beliefs. In Sri Lanka, many Buddhists look for the spirits and gods of the traditional forest religion for daily help, and a frequent phenomenon in connection with Thai temples is the presence of an ancient, decorated tree, going back to a pre-Buddhist animistic religion, called Bon, that focused on the spiritual powers emanating from such trees. Apparently the location of the tree was a factor in designating that particular site as auspicious for the erection of a temple. Now, if there is a holy tree in a location, right next to a temple dedicated to the Buddha, it is to be expected that the gods congregate particularly in that area.

We'll talk more about lay practices on the next page.