THE MANY FACES OF B÷N 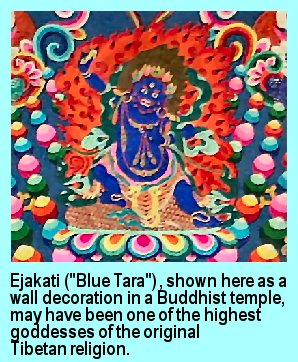 This page assumes that you have read the previous two, containing a brief history and the components of Tibetan religion. Otherwise, there may be some misunderstandings.

There was a time when the consensus among non-Tibetans concerning the nature of Bˆn was fairly simple. It was considered to be the barbaric animistic and shamanistic religion of Tibet prior to the country becoming civilized thanks to Buddhism, and it was said to have left certain traces of its macabre beliefs and practices, which have contaminated the purer form of Buddhism that would otherwise have been present in Tibet.

However, this understanding of Bˆn has been replaced by a more complex, and also more intriguing, picture. We can now identify a number of stages through which the Bˆn religion, whose adherents are called ìBˆnpos,î has in all probability traversed, beginning with what we called "pre-Bˆn" on the previous page. We are more completely aware of a contemporary form of Bˆn that contains far more content than demonic rituals and bloody sacrifices if it maintains those at all.

Our sources concerning the religion of Tibet prior to the coming of Buddhism are fairly limited, and so, much of what we believe concerning that time has been based on descriptions of beliefs and practices that have been reformatted through assimilation and adaptation. Bˆn is still a living religion, having restructured its identity over the centuries, but it is possible to speak to adherents of Bˆn today and learn about its present beliefs, not to mention studying the historical records. Where we run into conceptions that are clearly neither adopted from nor a direct reaction against Buddhism, we can start to formulate some hypotheses concerning the possibility of their having ancient indigenous origins, which may reflect back to pre-Bˆn or the so-called nameless or popular religion. Similarly, it is not too difficult to take a look at Tibetan Buddhism today and find aspects of the beliefs and practices that have no counterpart in other parts of the world, except that they are a part of Bˆn, and venture the thesis that their origin may have been with Bˆn. For example, it would appear that a number of female deities ("Taras") such as Ejakati (Blue Tara), Ushnishavijaya, and Marichi may have been carried over from the original pre-Bˆn into Buddhism. 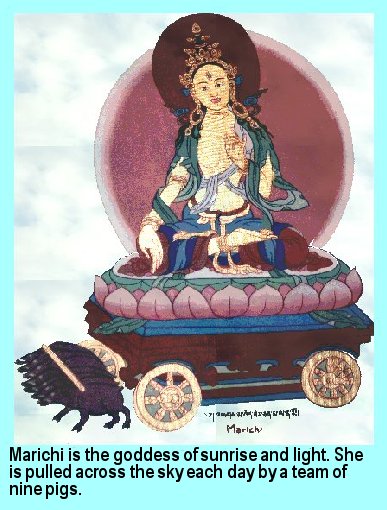 Based on that information, it has been possible to abstract the apparently indigenous elements and get an incomplete, but not incoherent, picture of what the original Bˆn (if that was its name) may have been like. From what we can tell, it was a polytheistic religion with specific gods and goddesses in charge of particular aspects of nature and human culture. It appears that politically the people of various provinces at the time lived under monarchies, and that the kings were frequently considered to have had divine status, as was the case with the tsenpos, who eventually united Tibet. Also, there was a priesthood, who carried out various practices, some of them most likely shamanistic.

As mentioned above, it is not always easy to distinguish what may have been the ìessenceî of Bˆn at that time in contrast to the animistic practices that tend to rear their heads in many different contexts. That they were there, and that they were encouraged at the time by the priesthood, and that they have persisted, at least on the folk level of the religion, seems to be beyond doubt. But they do not necessarily carry the distinctive identity of Bˆn any more than the later Buddhism does.

Now, if you have a religion, which has the divinity of the king as one of its main tenets, and suddenly the new line of kings no longer adheres to the old faith, it is bound to face a severe crisis. As we saw in the brief history on the first page, the tsenpos first tolerated Buddhism, but under Trisong it became the official state religion--at least for a while.  As we observed, the political struggles often entailed religious strife, with the indigenous religion and Buddhism going up and down on a see-saw of dominance. There were times when it is fair to say that, sadly, one of the two religions persecuted the other. 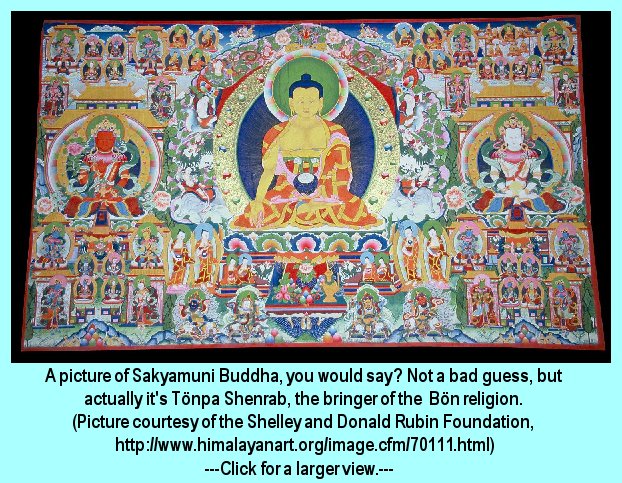 Still, by the tenth and eleventh centuries, Buddhism was once again firmly in the saddle, where it would stay until the twentieth, and much of the dissonance occurred between the monastic orders of Buddhism. By that time, Bˆn had managed to hold on to a certain amount of ground, not only by defending itself, but also (at least in the view of many outsiders) by adaptation and imitation. Up until the attempted obliteration of Tibetan religion by the Communist Chinese, there still were regions in Tibet where Bˆn was dominant, and where it had thriving monasteries. We can reject the idea that Bˆn became a counter-religion to Buddhism in the sense that it deliberately reversed Buddhist teachings. However, it did accept Buddhist thoughts and rituals, and often did so while simultaneously maintaining them in a unique manner. Obviously, an adherent of Bˆn is most likely to say that his or her religion, as it stands now, was the original truth.

The parallels between Bˆn and Buddhism as they have developed over the centuries are fascinating. At this point, the basic conceptual structure of Bˆn is very similar to Buddhism. The fundamental issue of Buddhism, of course, is to escape the suffering of existence in this world and to find liberation once one has realized oneís own nonexistence and attained the state called Nirvana. To get there, one has to spend time in meditation and certain austerities so as to come to a point of enlightenment. There are special people, the monks, who are totally focused on this task, while the laity can support the monks and their monasteries, thereby earning merit towards a better rebirth in the next life. This sketchy description applies to Bˆn just as much as to Buddhism in Tibet. The Buddha-like figure whom they venerate is not Gautama Sakyamuni, the historical Buddha, but a person named Tˆnrab Shenrab Miwoche, who came from the far land of Zhangzhung, popularly called ìShambala,î to teach the new religion. Now, by itself, that difference might not be a reason for a major schism. After all, many Buddhists are devoted to the Buddha Amitabha, virtually to the exclusion of Gautama, even though they recognize him in principle. However, the Bˆnpos believe that Sakyamuni was not an authoritative Buddha at all, and that notion has caused problems. 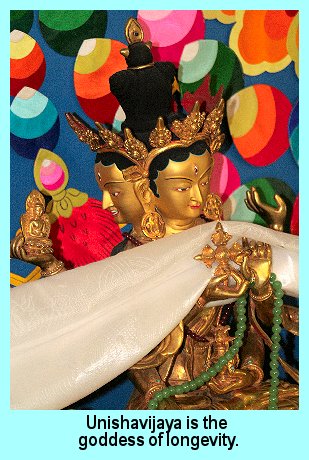 Nor is there any question that Bˆnpo practice is in various details different from Buddhism. In Tibetan Buddhism acts of merit, such as twirling a prayer wheel or circumambulating a holy place must be done clockwise to be effective; a counterclockwise rotation would undo the benefits acquired. The Bˆn convention is to move counter-clockwise. They have their own chants and rituals, and they do perhaps stress the shamanistic side of Tibetan religion more than the Buddhists, but, as we said, one cannot eliminate the animistic-shamanistic elements from Tibetan Buddhism either.

So, Bˆn has retained a shadow existence as yet another, albeit rather drastically different, school of thought in Tibet. It resembles Buddhism in many ways, but for a long time was not accepted as a school of Buddhism. It underwent persecution and some violent repression. However, it is possible to make too much of that fact because so did all previous ("Red Hat") schools of Buddhism, when the Gelug ("Yellow Hat") school took over supreme power in Tibet, thanks to the military support of the Mongols. Particularly the 5th Dalai Lama, known for his devotion, was also ruthless in suppressing dissent by force.

The Bˆnpos have encountered a dilemma ever since the time of the Tibetan exile, beginning in 1951. As the movement to free Tibet from the domination of China has developed, its emphasis has been on re-establishing a free Tibet. However, to most of these activists, a "free" Tibet has implied a "Buddhist" Tibet. The movement for Tibetan liberation has been led by Buddhists. Where does that leave Bˆn and its adherents, who are also in favor of a free Tibet, but have not been considered to be Buddhists? Consequently, the Bˆnpos started to lobby for recognition as a school of Buddhism, and in a controversial move in 1978 the 14th Dalai Lama declared that Bˆn was a genuine fifth school of Tibetan Buddhism. Many other high-ranking Buddhist lamas have disagreed with his statement, and one cannot assume that it will, indeed, be implemented, should the occasion ever arise for it to be possible. Even from the side of the Dalai Lama, the question whether this assertion belongs under the heading of upayana ("skillful means," the freedom to shade the truth in order to serve a greater truth) remains to be seen.

In the meantime, Bˆn or its predecessor has given Tibetan Buddhism many distinctive practices, such as prayer wheels and flags, as well as a host of gods and goddesses that are uniquely distinct from those found in any other Buddhist area of the world.