The ideas of Tantrism arose out of Hinduism, and they have given rise to certain physical excesses in both Hinduism and Buddhism. In some circles, so-called left-handed Tantrism includes the practice of ritual intercourse under the rationale that one has to call up one's passions in order to master them. However, for our purposes, we are happy to leave aside that somewhat dubious piece of wisdom and limit our observations to the conceptual realm where we can find enough information to get the point across. 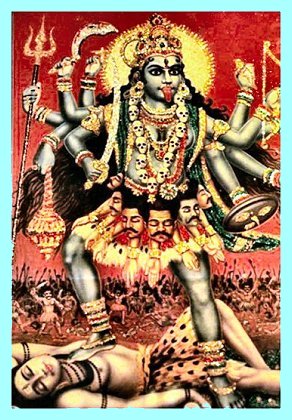 Tantrism arose out of the Hindu school of Shakti devotion. The Hindu Bhakti (devotion) movement has three main branches depending on which deity is considered to be supreme: Shiva, Vishnu, or a goddess. The school that focuses on the goddess is called the "Shaktite" school. The goddess can be called simply "goddess" (devi), "Mother" (mata), a personal name (e.g., Parvati, Durga, Lakshmi, or Kali), or Shakti. The last-mentioned term means "power," and in the Shaktite school the meaning is that the female deity empowers her god to be able to do his work. The fundamental belief is that, just as a woman arouses a man sexually, so the goddess arouses the god, and together they attain new heights of power. A practitioner of tantrism allegedly can harness this power to bring about feats of magic.

Consider the picture on the left of the Hindu goddess Kali dancing on Shiva. For all the world, surely this looks like Kali is humiliating Shiva by performing a stomp dance on his lifeless body. Apparently she has vanquished him and is now giving a rather rather distasteful exhibition of her power. Not that one would ever consider Kali likeable, but this violation of proper etiquette surely shows how mean she really can be. That's what it may look like, but that's not what it's all about. 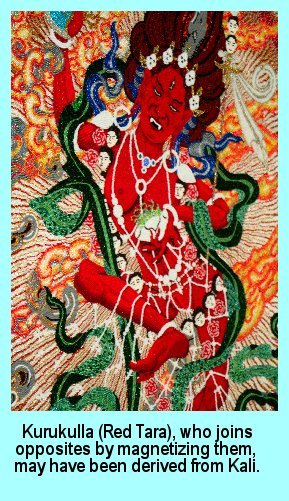 If you focus a little more closely at the background scenery, you will see that in the mythology corresponding to this picture, there was a great battle going on. The asuras (evil spirits in this context) were trying to take over the world, and the gods (devas) did not have sufficient strength to prevent them from doing so. If ever there was a time when Shiva's mighty power was needed, it was now. But where was Shiva? He was off by himself grieving because he had recently lost his beloved wife, Uma. He was giving up on life, willing himself to die, and he was succeeding. By the time that the other gods and goddesses found him, he was a virtual corpse. There was only one thing to do, namely to wake Shiva out of his coma. The person to do so was the goddess Kali. And yes, she really was doing a stomp dance on Shiva's lifeless body, but she was doing so in order to resuscitate him, not to harm him or humiliate him. Happily, she succeeded, and Shiva led the devas to a glorious victory.

So, the female brings the male to life in order for a full release of power to occur. She catalyzes him. Note that in this context, the female constitutes the active principle, and the male is the passive one. To generalize from there, as two opposites are conjoined, power is released, like mixing two harmless chemicals that explode on contact.

This is the fundamental principle of Tantrism, which originated with some versions of Hinduism and had already established itself among some schools of Buddhism long before it migrated to Tibet. It is the form of Buddhism that Padmasambhava brought with him to Tibet. Tibet turned out to be a good location for it because the original religion boasted a number of goddesses that could thereby be carried over into Buddhism. Consequently, it was possible to outfit each Buddha and Bodhisattva with a consort, making some adjustments here and there, so that each of them could be inserted into a slot among the many Tibetan Buddhist deities. 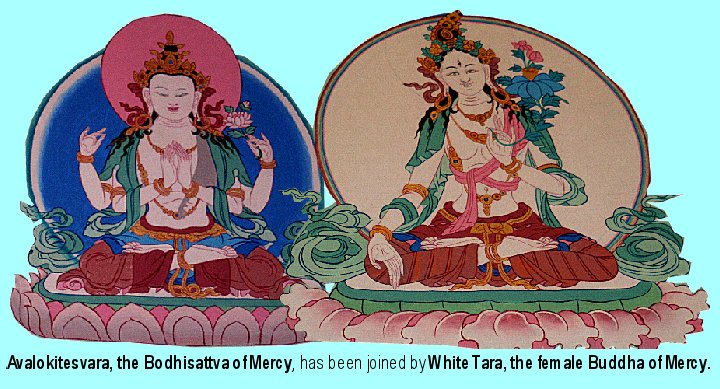 The Tantric notion of power produced through the conjunction of opposites also plays a major role in the Tibetan understanding of enlightenment. Enlightenment occurs when a person's thoughts (citta) become non-dual, which is a state called heart-mind. This is to say that all of the distinction we usually use to separate things and perceptions are sublated into a state that is one--except we should not even call it "one," if in doing so we are distinguishing between "one" and "two." That is why it is called "non-dual."

Our ordinary consciousness recognizes certain distinctions that seem to be hardwired into us. They are distinguished as proper right and proper left.

In the attainment of enlightenment, these distinctions are overcome. Let us take the two halves of the table and turn them into two halves of a circle, rotate the circle ninety degrees, reshape the two parts somewhat, and we get the sun and the moon, each representing one of the two sides. As they have been joined, the flame of power leaps out of them. The result is an image found in many places around Tibetan Buddhism. It symbolizes the pinnacle of citta--"heart-mind."

Among the many practices and rituals associated with Tantrism in Tibetan Buddhism, it is not always easy to pinpoint where Buddhism leaves off and magic picks up. But it is high time for us to start considering the "Buddhism" part of Tibetan Buddhism more directly.