Zen is a frequently misunderstood, not to mention misrepresented, part of Mahayana Buddhism. In the West, it is often equated with meditation or with the notion that our lives don't make any sense. Worse yet, in many circles Zen is treated as a tool to get ahead in life, improve your career, win basketball championships, or make more money. Then again, some people think of it as nothing more than being clever with words, which doesn't do anything about the more serious problems of life.

Zen, in its own unique way, dismisses all of these conceptions, not so much by saying that they are wrong (though they are), but by telling us that all of those ideas have us looking in the wrong direction. It shows us that, even if we are asking the right questions, we may be posing them in the wrong way and are, consequently, not arriving at the proper answers.

In this video, Stewart Redi gets us to "see" Zen. As you are watching, be prepared for a few false starts as you try to catch on to the nature of Zen.  Even when you think you get it, you may find a minute later that you still don't. It may take you until the very last frame to get a grasp of something that's been there all along . . .

The Basics of Zen Buddhism from Dharma2Grace on Vimeo.

The following sutra is an early example of the concepts behind Zen Buddhism. It is a part of the much larger Prajna Paramita Sutra, the Sutra of Perfect Wisdom.  As is true for many such documents, its origin is disputed. Assessments vary from its being originally composed in Sanskrit in the first century AD to its being written in Chinese several centuries later. Regardless, whether as a translation or as a direct creation, the earliest actual copies that we have are in Chinese. It has been a central scripture of the Chan (Zen) lineage of Buddhism in China for a long time.

This sutra is believed to be a condensation of the essential message of the Prajna Paramita Sutra, which is to say that it gets to the "heart" of it, and, thus, it is popularly known as the "Heart Sutra." You don't find any references to the heart, human or otherwise, in this short work.

In this sutra, the Bodhisattva Avalokitesvara, after a long time of meditation, gains enlightenment by recognizing the emptiness (sunyata) of everything. The person whom Avalokitesvara addresses is Sariputra, one of the first disciples of Sakyamuni, the Buddha, to whom a number of early sutras are directed. In this case, there is no question of an actual conversation between Avalokitesvara and Sariputra having occurred, nor is any intended.

Please take note of the full impact of what this sutra teaches. Everything is emptiness, including the Bodhisattva, the beings whose whose sufferings are alleviated by the Bodhisattva by teaching them that all is emptiness, the five attributes of being (skandas), even the four noble truths. So, the first part concludes "There is no understanding and attaining."

Then what's the point? The point is that this very realization is nirvana. And so, one accepts life as it is, knowing that one is already in the state of nirvana, and chants the concluding mantra, which is left untranslated in this version. If it has any literal meaning, then it is probably an affirmation of contradictory concepts that together make up the non-dual nature of reality.

The following is a translation provided under a "creative commons" license by the Lapis Lazuli Society: 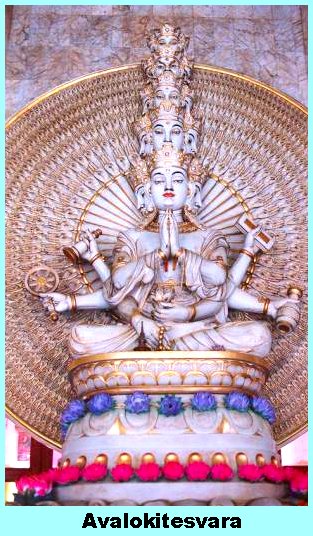 When Avalokiteśvara Bodhisattva was practicing the profound Prajńāpāramitā, he illuminated the Five Skandhas and saw that they were all empty, and crossed over all suffering and affliction.

"Śāriputra, all phenomena are empty: they are neither created nor destroyed, neither defiled nor pure, and they neither increase nor diminish. This is because in emptiness there is no form, sensation, conception, synthesis, or discrimination. There are no eyes, ears, nose, tongue, body, or thoughts. There are no forms, sounds, scents, tastes, sensations, or phenomena. There is no field of vision and there is no realm of thoughts. There is no ignorance nor elimination of ignorance, even up to and including no old age and death, nor elimination of old age and death. There is no suffering, its accumulation, its elimination, or a path. There is no understanding and no attaining.

"Therefore, know that Prajńāpāramitā is a great spiritual mantra, a great brilliant mantra, an unsurpassed mantra, and an unequalled mantra. The Prajńāpāramitā Mantra is spoken because it can truly remove all afflictions."